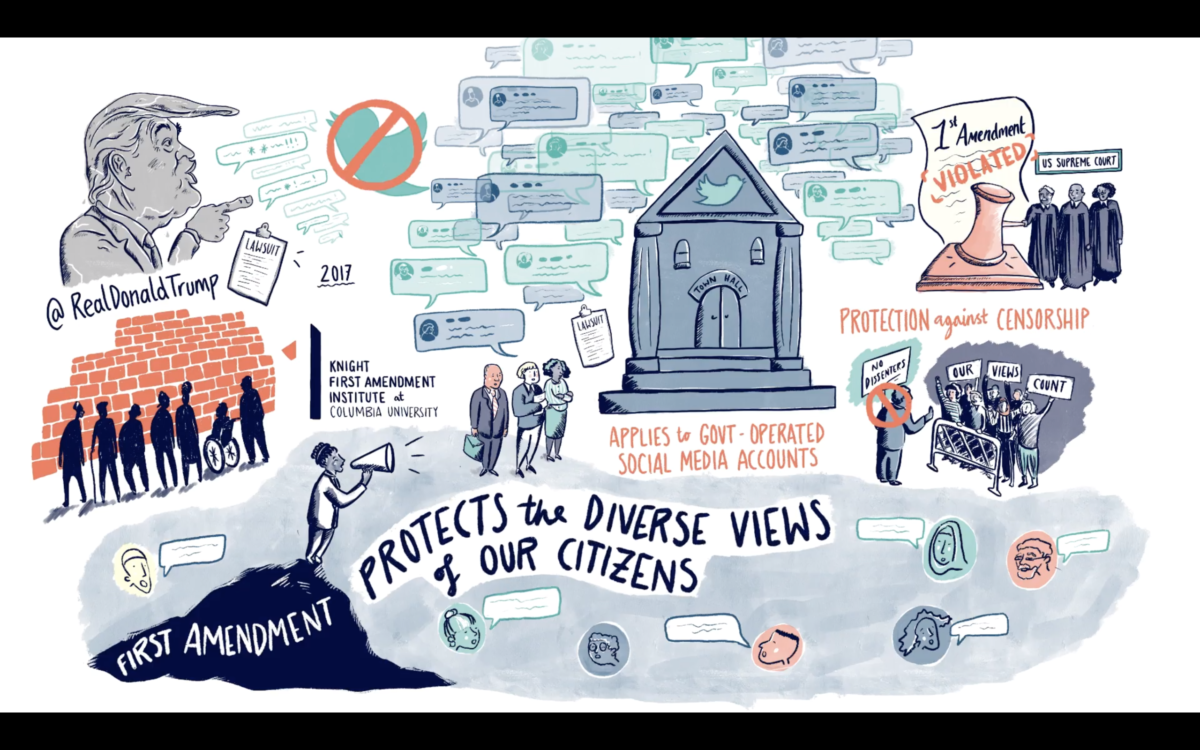 A successful challenge to President Trump’s practice of blocking users on Twitter has far-reaching implications for protecting free speech online.

Earlier this year, we explored a range of digital rights topics in video format as part of the Digital Freedom Fund’s Digital Rights Around the World Series. We are now revisiting some of those topics with updates from discussions that happened during our 2021 Strategy Meeting and additional developments since then.

As president, Donald Trump broke many norms, his use of Twitter being just one. However, his use (and abuse) of his Twitter account led to a groundbreaking lawsuit.

In 2017, Knight First Amendment Institute at Columbia University sued the president on behalf of seven individuals whom he had blocked from his “@RealDonaldTrump” account because he did not like their replies criticising his presidency and policies.

The claimants argued that Trump effectively used his Twitter account as a kind of virtual town hall where he communicated with, and heard from, the public about official White House business. This raised the question of whether his personal Twitter account (as opposed to the official @POTUS account originally started under President Obama) should be considered a “public forum”.

Long before Twitter, the U.S. Supreme Court held that the First Amendment to the U.S. Constitution prohibits government officials from excluding people from open town halls, or “public forums” because of their views. In its lawsuit, the Knight Institute successfully argued that this First Amendment protection against censorship in public forums also applies to government-operated social media accounts like the President’s Twitter account. The Second District’s Court of Appeal thus held, in July 2019, that the President violated the First Amendment when he blocked his critics from the account.

Following the court’s decision, the White House unblocked the users on whose behalf the lawsuit was brought, as well as other Twitter users who had been locked out of President Trump’s comment threads.

While the Supreme Court subsequently vacated the judgment in 2021 because the case was deemed moot – Twitter banned Trump in January 2021, and Joseph Biden was inaugurated as the President shortly thereafter – Justice Thomas, in his concurring opinion, conceded that the plaintiffs “have a point … that some aspects of Mr. Trump’s account resemble a constitutionally protected public forum”.

However, while acknowledging that social media companies “provide avenues for historically unprecedented amounts of speech, including speech by government actors,” Justice Thomas also raised concerns about the role of those companies themselves and the “concentrated control of so much speech in the hands of a few private parties”. This may indicate that the court might be willing to consider the substantive questions in possible future suits.

Despite the Supreme Court dismissal, the Second District Court’s reasoning has already been adopted by other U.S. courts, which have treated social media accounts of public officials as public forums under the First Amendment. Those rulings have changed how public officials manage accounts on Facebook and Twitter, and how the U.S. Army moderates comments on the video-game-streaming platform Twitch, which it uses for recruitment.

As the dust on the Trump presidency settles, it is clear that this case is not only about Trump and his Twitter practices, but instead stands for the general principle that the First Amendment protects the diverse views of U.S. citizens. That protection extends to expressing their views online and receiving information from the accounts of public officials and authorities.

Politicians blocking users on social media is not unique to the United States but is an increasingly common practice in Europe as well. That’s why, at DFF’s annual strategy meeting this year, participants discussed what the victory in the Trump case could teach us about protecting users’ rights in other jurisdictions.

While the US ruling may not be directly transposable overseas, its logic could still be used to support similar cases in Europe that seek to promote and protect free speech online

While the US ruling may not be directly transposable overseas, its logic could still be used to support similar cases in Europe that seek to promote and protect free speech online. For example, a German court ruled in 2018 that large private venues, like football stadiums, cannot indiscriminately ban individuals from attending events without providing factual reasons for the ban, because it impacts an individual’s ability to participate in social life. The logic of the court’s ruling could be applied to a “private venue” such as a personal social media platform or account, particularly where that account is run by a public official.

At this year’s DFF strategy meeting, participants contrasted the use of social media as a public forum with the problem of online harassment, particularly in a European context. While protecting the speech of dissenters on social media is crucial for civic discourse, the block function is also a tool used by public figures who are particularly vulnerable to hate speech. Women and members of marginalised groups in public office are frequent targets of misogyny, racism, and death threats online.

While protecting the speech of dissenters on social media is crucial for civic discourse, the block function is also a tool used by public figures who are particularly vulnerable to hate speech

While some have found redress in court, blocking abusive users is often still the most immediate means of abating a stream of vitriol. And while the European Convention on Human Rights certainly protects freedom of expression, it extends no such protection to hate speech. Participants noted that because hate speech itself can have a chilling effect on freedom of expression – by driving users off the internet and creating a hostile environment for civic discourse – any effort to protect free speech online should also include the needs of those most subject to abuse online.

As the use of online forums becomes more and more prevalent, prohibiting officials from excluding dissenting voices has never been more essential for democracy and civic discourse.