The American Civil Liberties Union (ACLU) and Electronic Frontier Foundation (EFF) told participants about their work challenging anti-encryption measures. These organisations frequently collaborate to challenge anti-encryption, seeking protection of the rights of individuals (and their devices) under the Fifth Amendment. This protects people under investigation from being forced to open their devices to police or courts, as doing so may violate their right against self-incrimination.

EFF also shared experiences of their work in the Apple v. FBI case that concerned a judgement requiring Apple to engineer a ‘backdoor’ into its iPhone software operating system. This would create a security flaw leaving iPhone users vulnerable to hack. In this case, EFF filed an amicus brief to the court arguing that Government demands were violating Apple’s First Amendment rights. An interesting discussion point came from reflections that, when it comes to challenging anti-encryption measures, sometimes maintaining the status quo can be considered a win. Under this theory, the longer that anti-encryption measures can be held back, the more encryption will become the ‘norm’.

We also heard how US and European organisations have collaborated in the past, commonly through interventions by US organisations in European cases. EFF and the ACLU called for more European organisations to reach out about anti-encryption cases, so that cross-Atlantic collaboration can continue to grow in the future. Other topics touched upon during the conversation were attempts from the police in the UK to gain access to the phones of sexual abuse victims and ongoing work in Russia, where the Government are trying to force Telegram to provide access to users’ keys.

At the end of the session, participants shared lessons learnt and made plans for follow-up and collaboration. This further built on some of the work done during the preceding transatlantic call, where participants focused on ‘heat mapping thematic areas for transnational collaboration’. This demonstrated an interest in exploring joint work on, amongst others, the privacy shield, facial recognition and the datafication of migrant and refugees’ data.

What we continue to appreciate from this transatlantic call series, is how the participant-led discussions during each call build the foundation for the next. We look forward to seeing this process continue and are exploring ways in which we can organise an in-person meeting to do more in depth work on issues of mutual interest.

Our next and penultimate call in the series will take place on Tuesday 15 October, focusing on ‘machine learning and human rights’.  If you have not yet registered to join this call and you would like to, please let us know, so we can add you to the list! 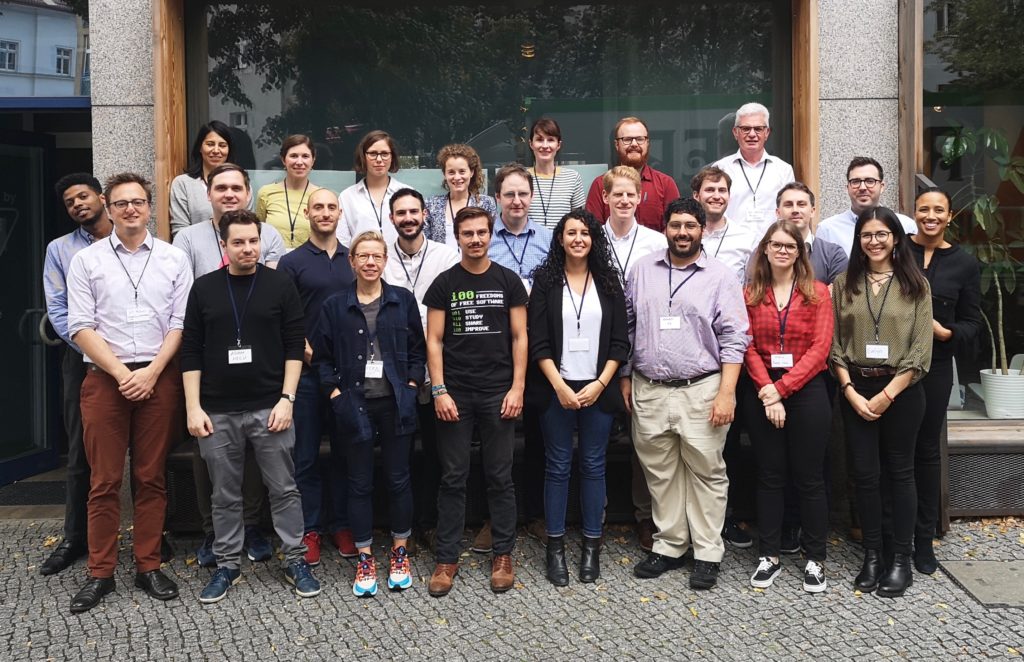 In May 2019, Access Now and noyb hosted a three-day meeting in Vienna to share knowledge and experiences on GDPR enforcement. The event covered several practical elements to take into account when litigating under the GDPR and considered the different avenues for taking GDPR complaints.

This week, DFF hosted a follow-up meeting in Berlin, which offered both an opportunity to look at the issue of GDPR litigation at field level and identify concrete options for GDPR enforcement. 21 participants from across Europe, including litigators, academics and activists, discussed issues ranging from how to address the functioning of DPAs, to using the GDPR to address the use of biometric data by private companies.

Following a mapping of current efforts of GDPR enforcement, the meeting took a critical look at a nascent framework prepared by DFF to prioritise litigation goals under the GDPR. Then, participants mapped priority litigation goals across a range of issues such as misuse of data by political parties, unlawful data processing by public services, and challenging “big tech” business models.

On the second day, participants formulated concrete case ideas distilled from the priority litigation goals and shared experiences of lessons learned in their GDPR work so far. A number of potential areas for follow-up were identified, which DFF is looking forward to supporting.

The meeting was energetically facilitated by Aspiration and hosted by the fantastic team at WE’RE ALL IN. Over the coming days, we will be publishing a number of guest posts to further highlight some of the conversations, so stay tuned for further updates.

If you are working on GDPR-related issues, have ideas for next steps or generally want to get involved, please get in touch!

What are the research or evidence gaps when it comes to the legal implications of facial recognition technology? What research or support is needed in the short term to litigate against the use of such technology by law enforcement? Which jurisdictions are most cost effective for facial recognition litigation? What can law clinics do over the coming year to assist in these kinds of cases?

These questions were considered during DFF’s virtual design jam on facial recognition this week. The design jam continued from and built on in-group discussions that arose during DFF’s workshop on ‘connecting the field with academia’ earlier this year. During the workshop, participants were eager to explore connections between the field and academia on a number of subjects andsome of these conversations gravitated towards facial recognition. The virtual design jam was an opportunity to take a further look at the questions posed above and to identify potential lines of collaboration and research.

During the jam, breakout groups mapped out the research and evidence that could be collected in the short and medium term to help build and develop strategic human rights litigation challenging the use of facial recognition technology. One room looked at the research and evidence that could assist litigation efforts to challenge the use of such technology by law enforcement. Another room examined what work could be done to help identify the ideal regulatory environments for taking cases against public and private actors’ use of such technology. Finally, another room considered more specifically what the role of law clinics might be in providing research or legal support for facial recognition cases.

At the end of the session, the breakout rooms reported out a number of specific research requests that could be taken on by academics, researchers or law clinics. For instance, one room sought more research on the “chilling effect” facial recognition technology has on rights, such as the rights to freedom of association and freedom of expression. Another room identified the need for a comprehensive mapping of how judiciaries and legislators in different European jurisdictions regulate audio-visual surveillance, CCTV, and facial recognition technologies.

DFF will share these research requests with its network, including academics, researchers and law clinicians who joined the workshop on ‘connecting the field with academia’ earlier this year. We also welcome hearing from other academics or researchers who are willing to assist and collaborate with digital rights litigators on this important work. If that sounds like you, please do get in touch!

We hope that this design jam will be the starting point for collaborative research projects that can later inform and strengthen litigation challenging facial recognition software.

A tale of three cities: practitioners from London, Berlin and Amsterdam share their views on digital rights litigation in Europe