Strategic litigation – litigation with broad impact and which can bring about legislative or policy change – has proven to be a crucial lever to protect human rights in the digital realm. The case studies provided here illustrate some of the important digital rights work of our grantees, which DFF is proud to support. 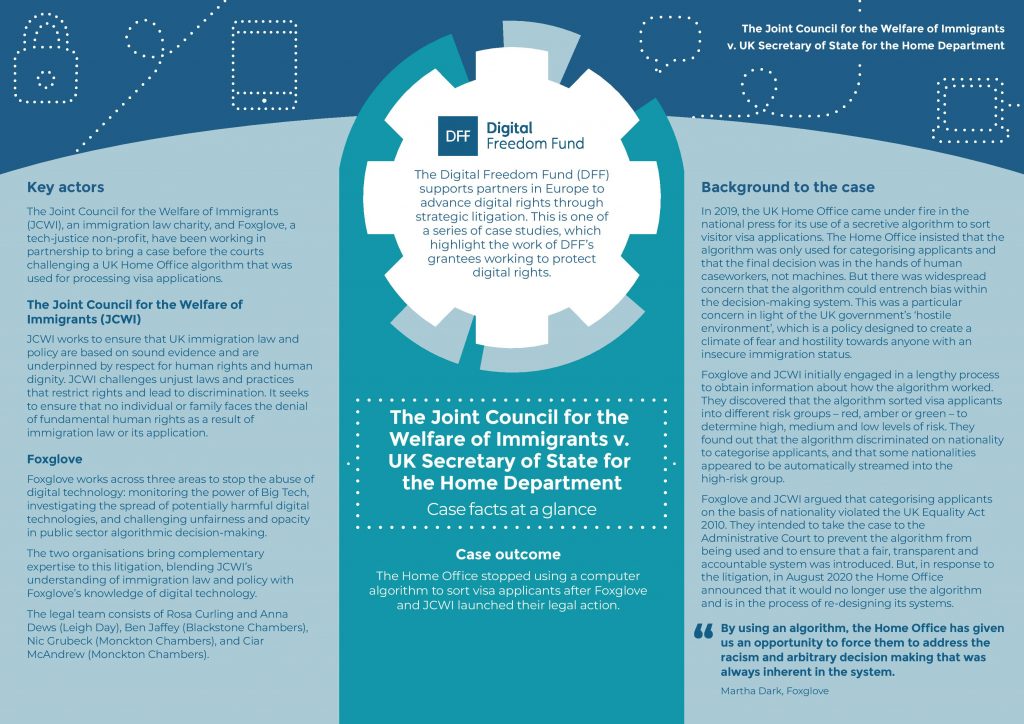 The Joint Council for the Welfare of Immigrants v. UK Secretary of State for the Home Department

In 2019, the media uncovered that the UK Home Office was using a secret algorithm to stream visa applications. This algorithm would automatically label visa applications as either ‘red,’ ‘amber,’ or ‘green.’ Those applicants flagged as ‘red’ would find their visas shut out or slowed down.

Foxglove and the Joint Council for the Welfare of Immigrants took legal action on the basis that this algorithm entrenched inaccurate and unfair decision making, and discriminated against visa applications of people from certain countries. They filed a claim against the UK government demanding they introduce regulations that ensure fairness, transparency and accountability in relation to use of such an algorithm. Read the full case study here or download in PDF.

The Hungarian Civil Liberties Union is taking three interrelated cases arguing that there is no effective remedy against unlawful surveillance in Hungary. By pursuing this litigation, they hope to encourage a more conducive legal environment for human rights defenders and activists to challenge surveillance and strengthen their freedom of expression and right to privacy. Read the full case study here or download in PDF. 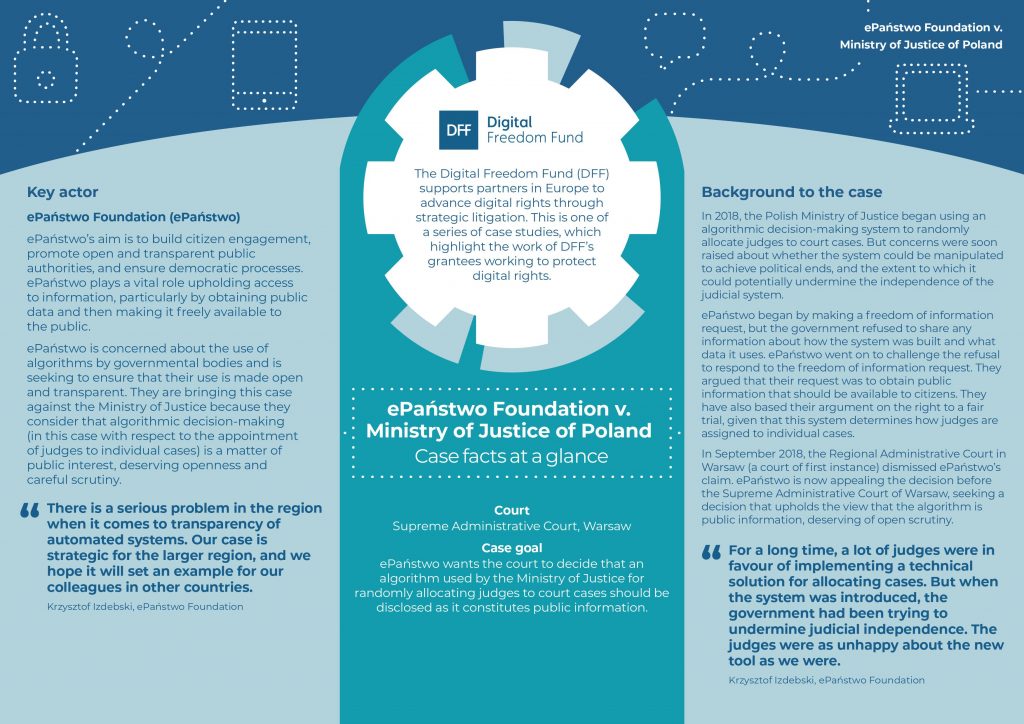 In Poland, the Ministry of Justice has developed an algorithm that is used to allocate cases to judges. There are concerns that the algorithm is inherently unfair and biased, but its details are kept secret from the public. The ePaństwo Foundation argue that such algorithms should be accessible through freedom of information law. 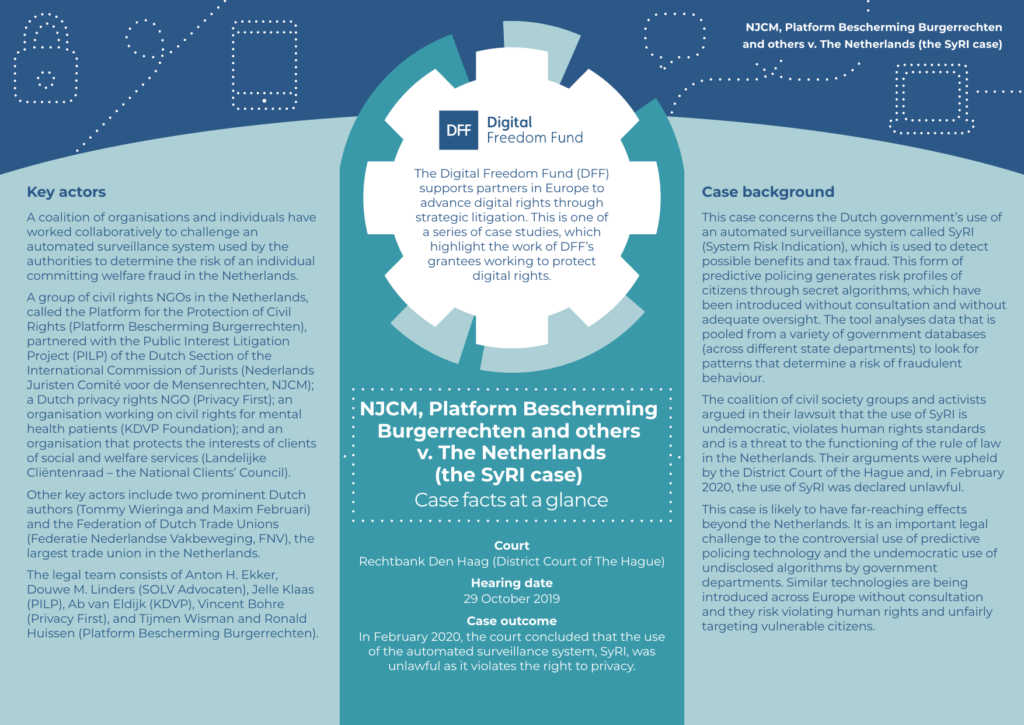 NJCM, Platform Bescherming Burgerrechten and others v. The Netherlands (the SyRI case)

The System Risk Indication (SyRI) is a risk-scoring algorithm used by the Dutch authorities to identify those likely to commit welfare fraud. The system relies on personal and sensitive data that is pooled from the databases of various public bodies and has been criticised for being biased, discriminatory, intrusive and inaccurate. A coalition of NGOs, led by the Public Interest Litigation Project (PILP-NJCM) and the Platform Bescherming Burgerrechten, joined forces with a Dutch trade union federation and two authors to bring litigation challenging SyRI on human rights grounds.

This is one of the first cases in Europe to challenge state use of “predictive policing” type tools to surveil and profile welfare recipients. In 2019, hearings were held before the First Instance Court of the Hague and, on 5 February 2020, the court ruled that the law underpinning SyRI was in violation of the right to private life under the European Convention of Human Rights. Read the full case study here or download in PDF.

De Capitani and others v. Federal Republic of Germany, Criminal Police Office of Austria and others

The EU Passenger Names Record (PNR) Directive requires EU states to collect the personal data of airline passengers flying in and out of the EU, including email addresses, credit card details, IP addresses and even on-board meal choices. The Gesellschaft fuer Freiheitsrechte (GFF) and epicenter.works argue that the collection and analysis of this data amounts to illegal mass surveillance, and leaves certain individuals vulnerable to discrimination by the authorities.

The two organisations are taking a number of strategic cases before civil and administrative courts in Germany, as well as the Data Protection Authority in Austria, arguing that the data retention under the Directive is illegal and violates human rights. The ultimate goal of the litigation is to obtain a judgment from the Court of Justice of the European Union invalidating the Directive. Read the full case study here or download in PDF.

With the help of Panoptykon, SIN has filed a lawsuit against Facebook. The case is an example of using strategic litigation to ensure private companies respect social media users’ rights to free speech and fair process, and has the potential to empower them to bring claims against private censorship online. Read the full case study here or download in PDF.

These case studies were developed and designed with the help of Jennifer Easterday, Alice Sachrajda and 05creative*.